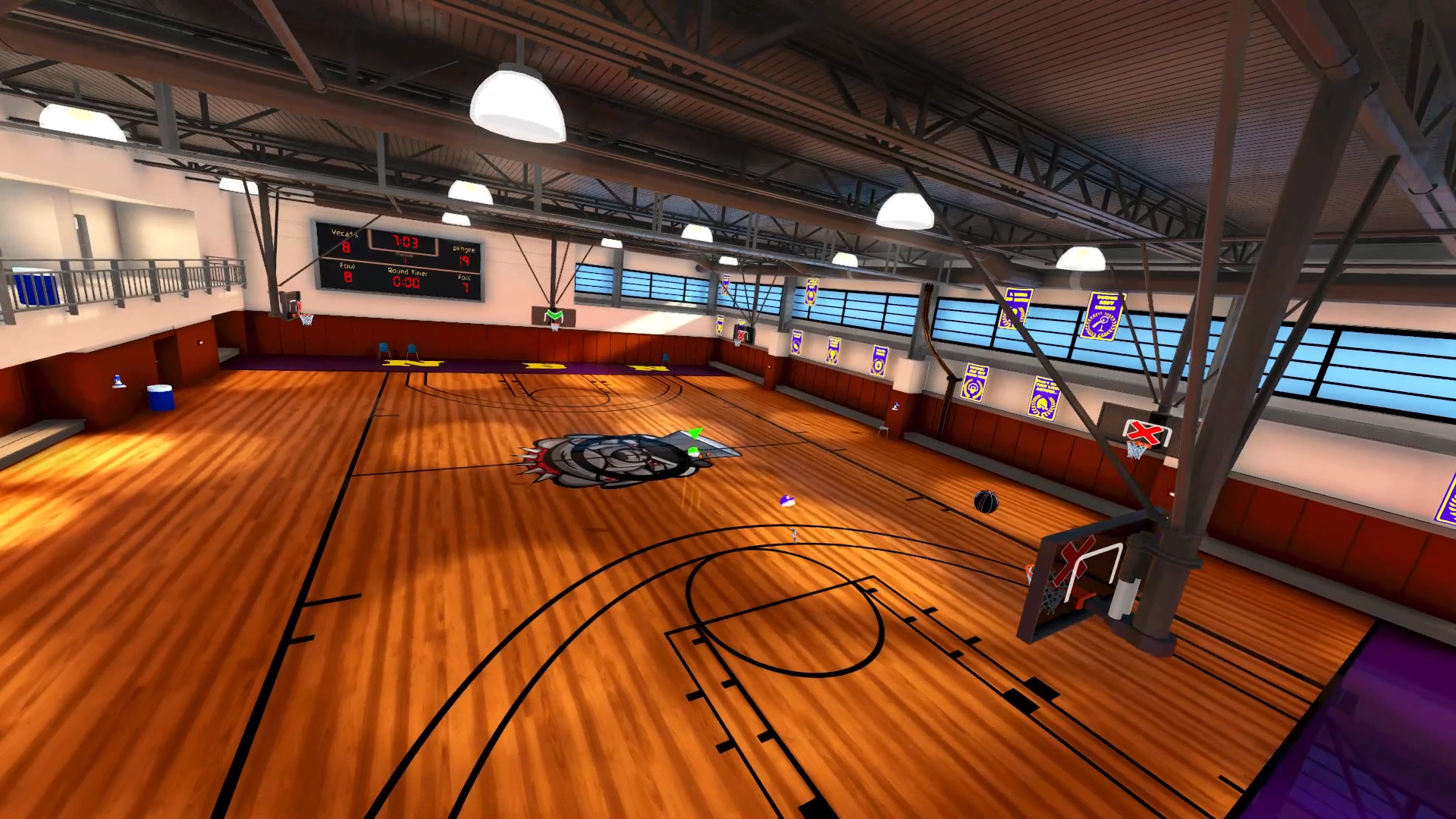 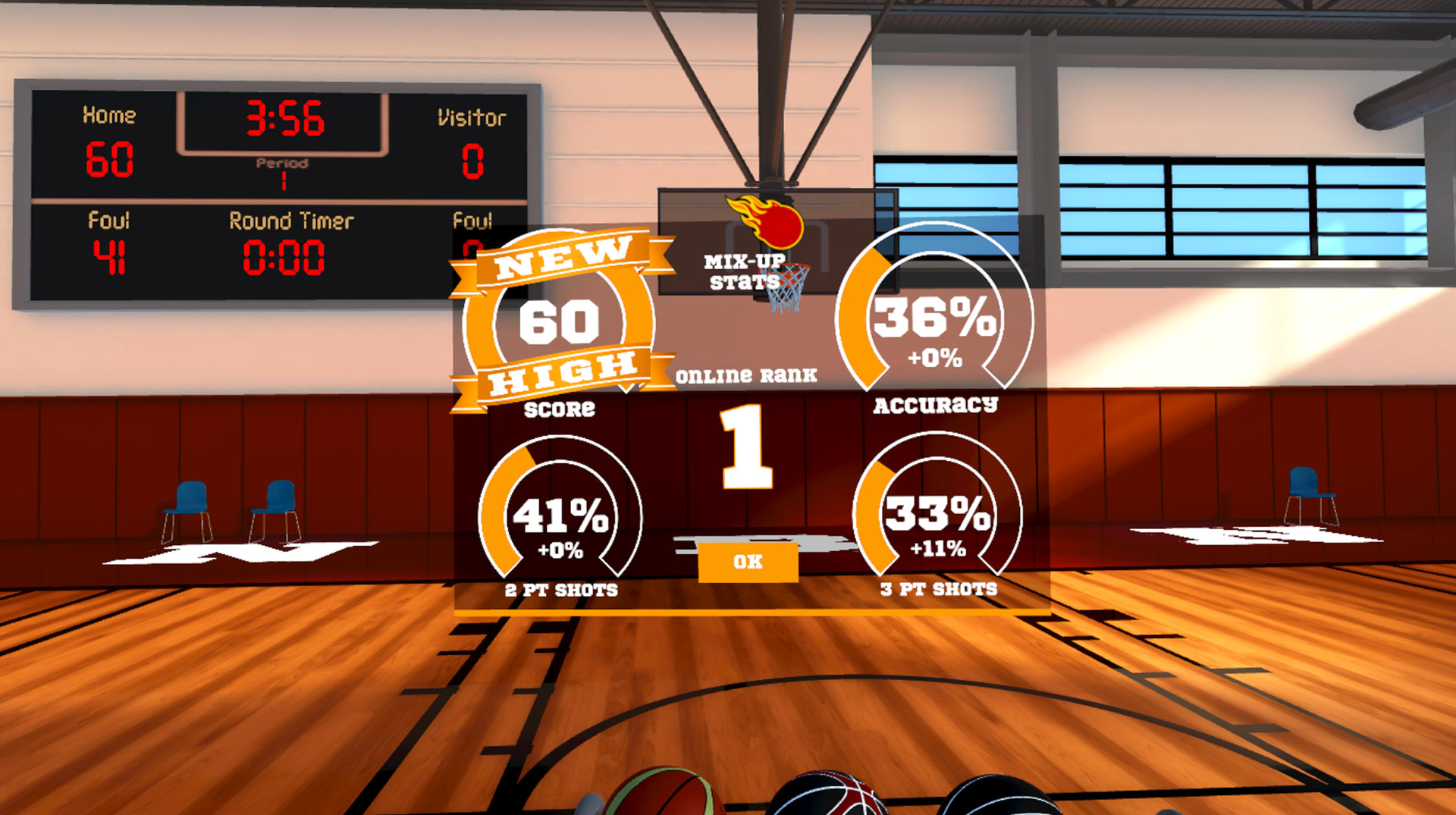 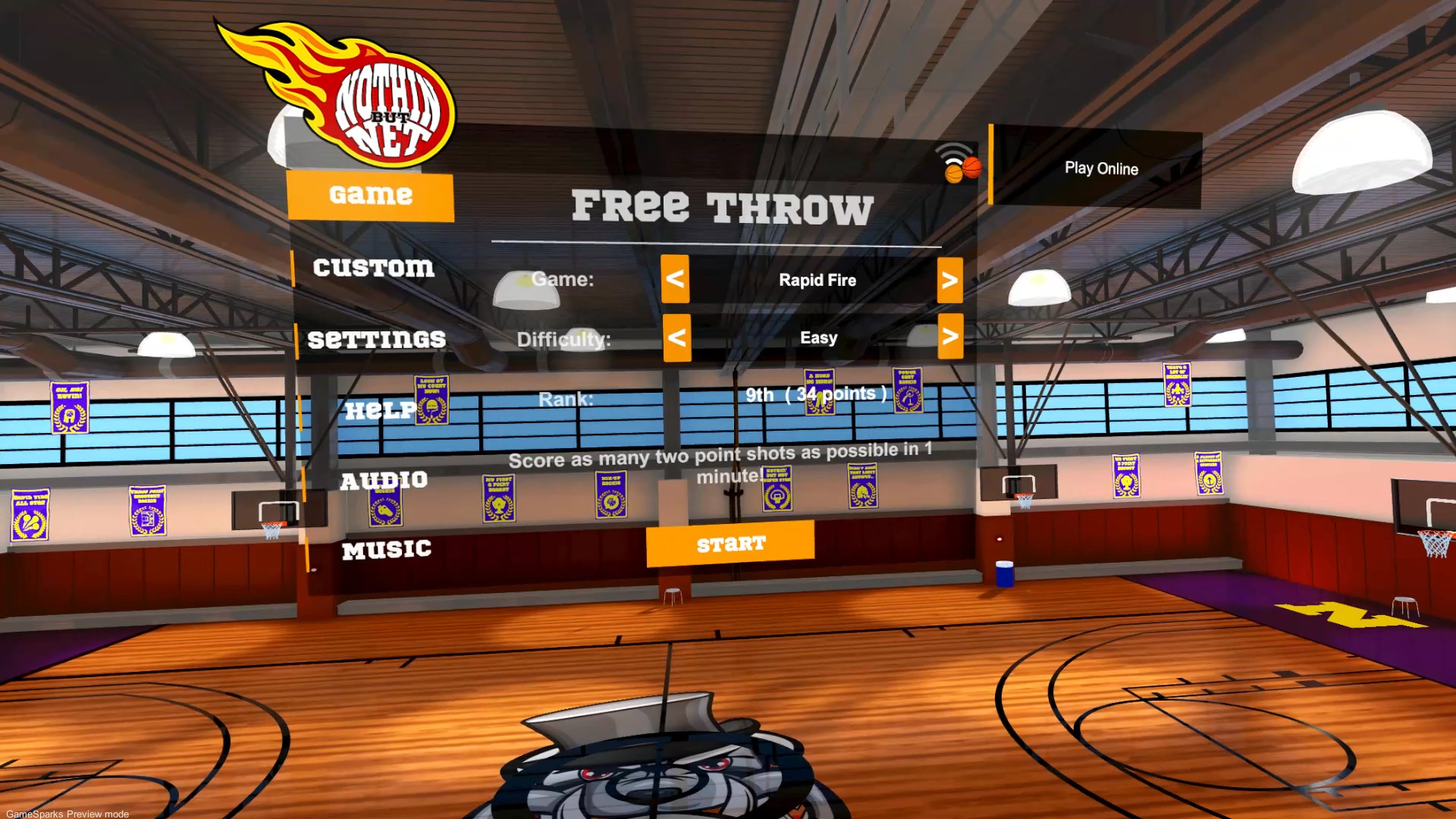 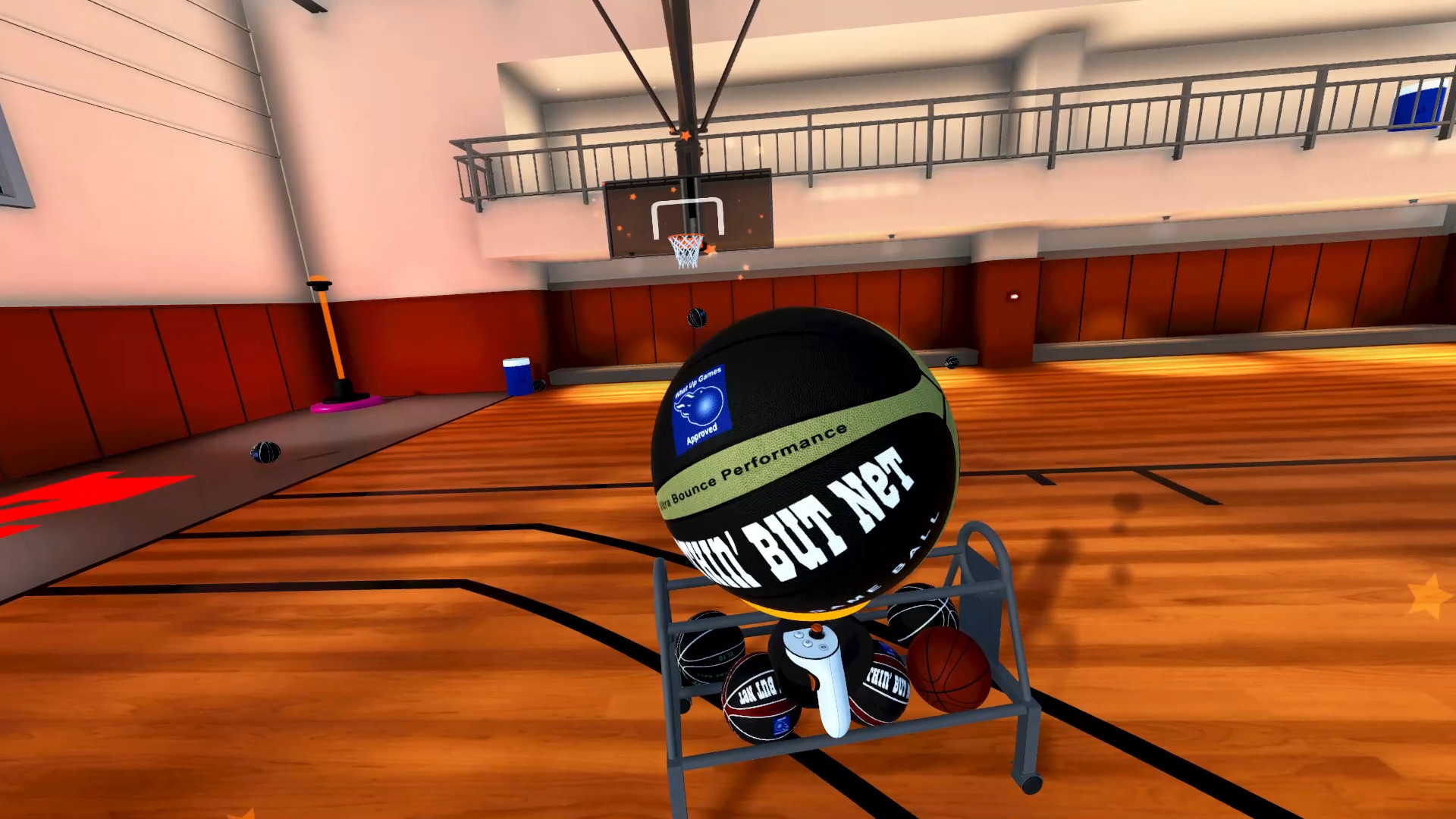 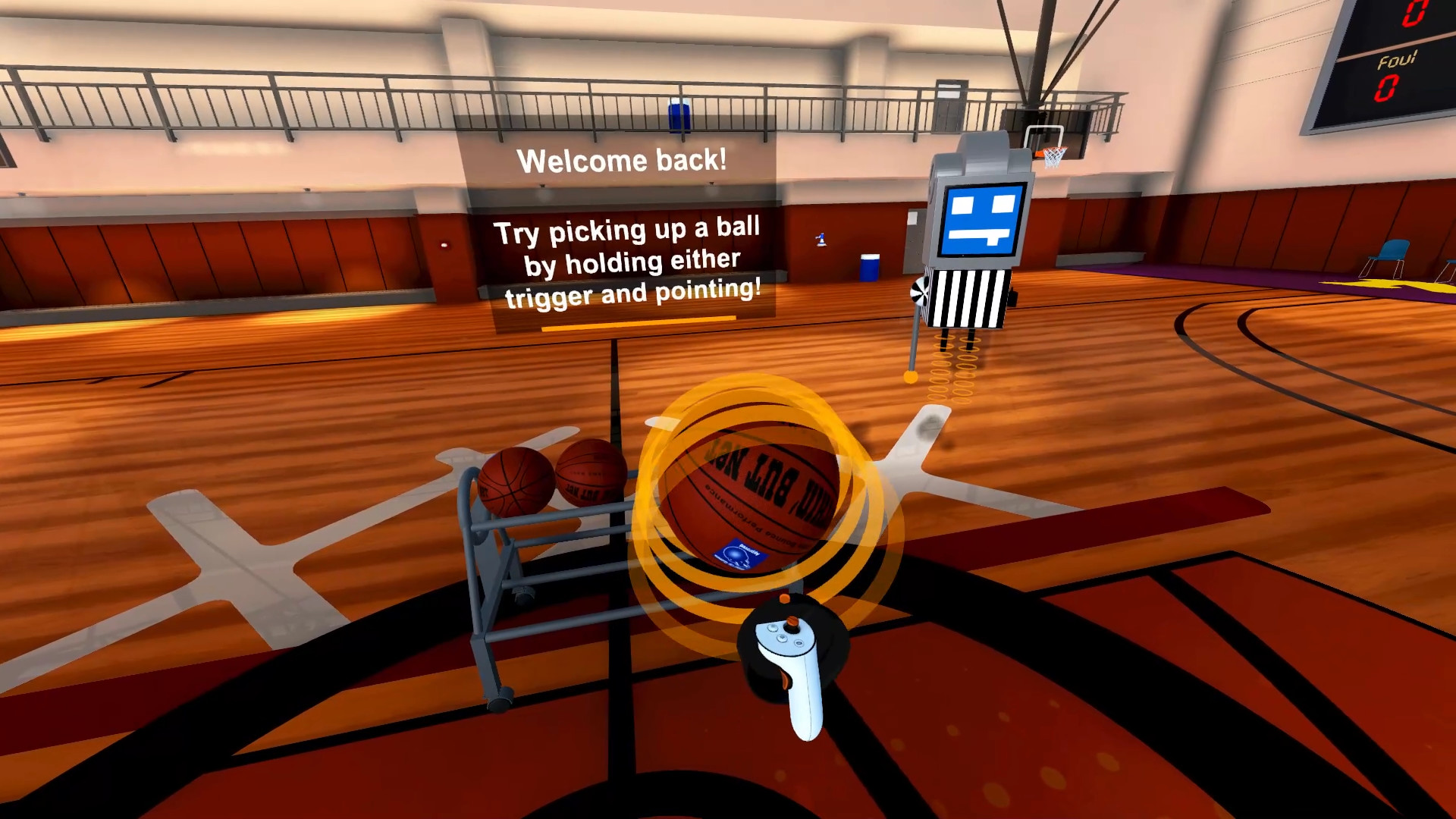 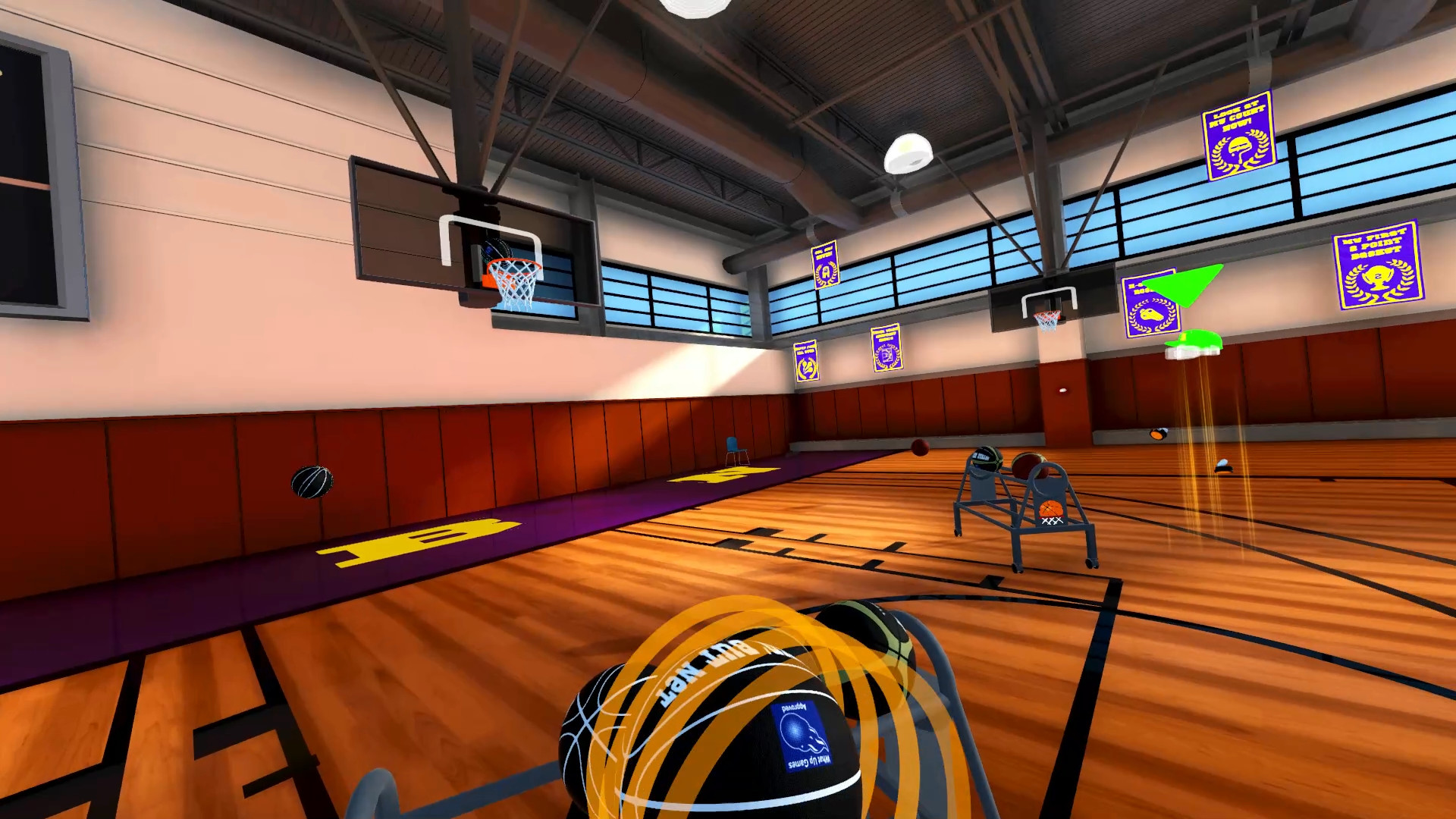 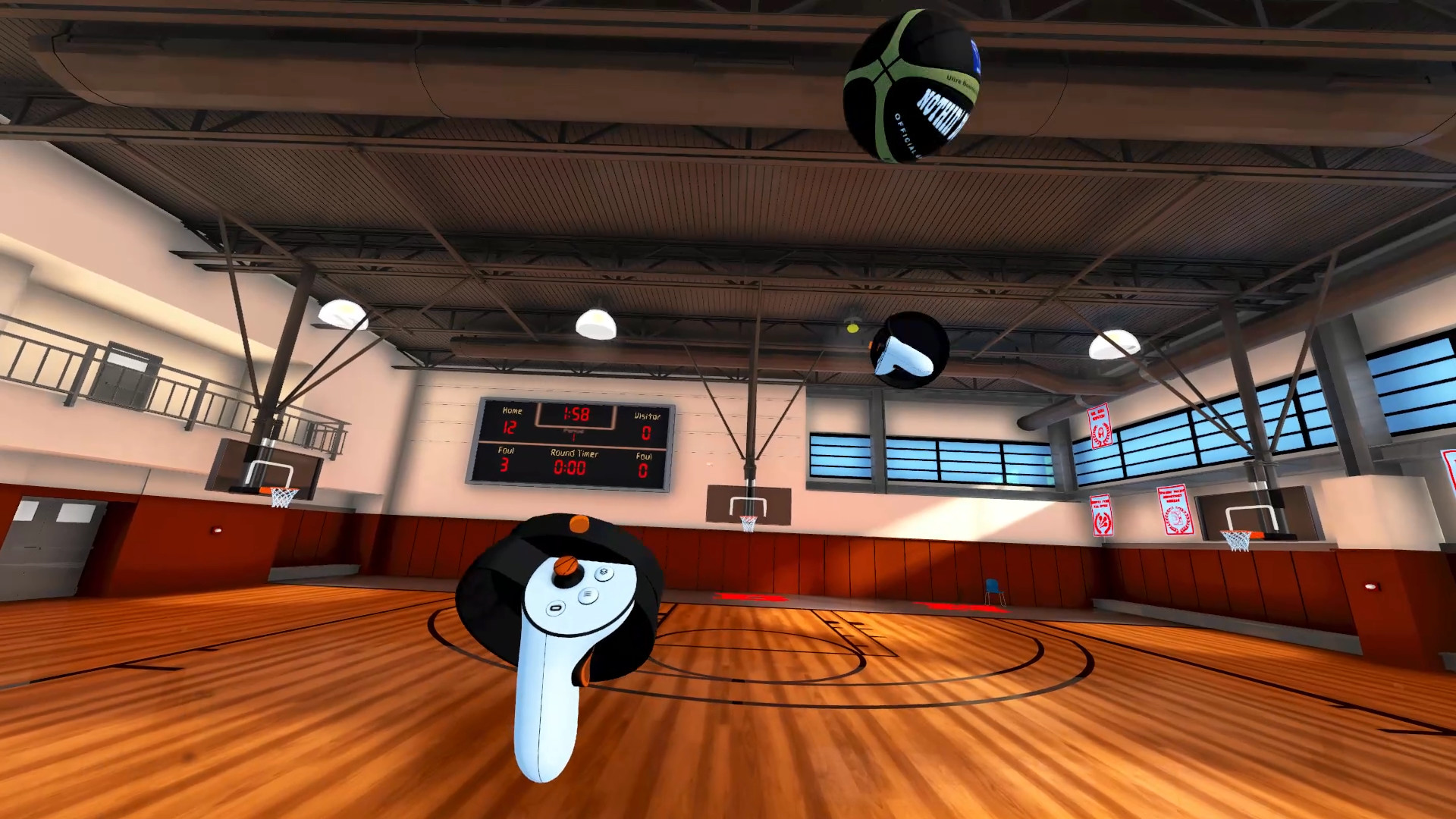 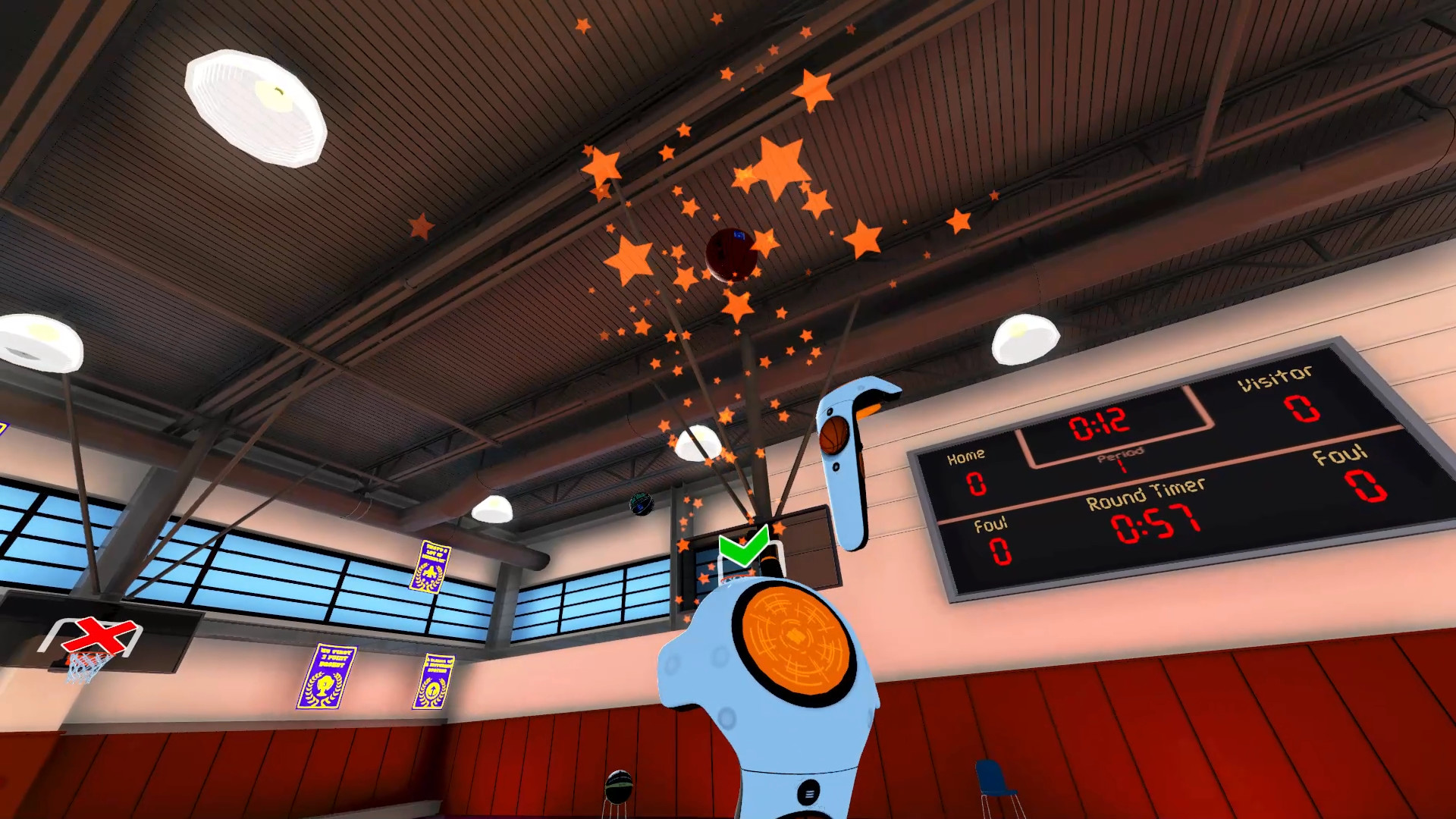 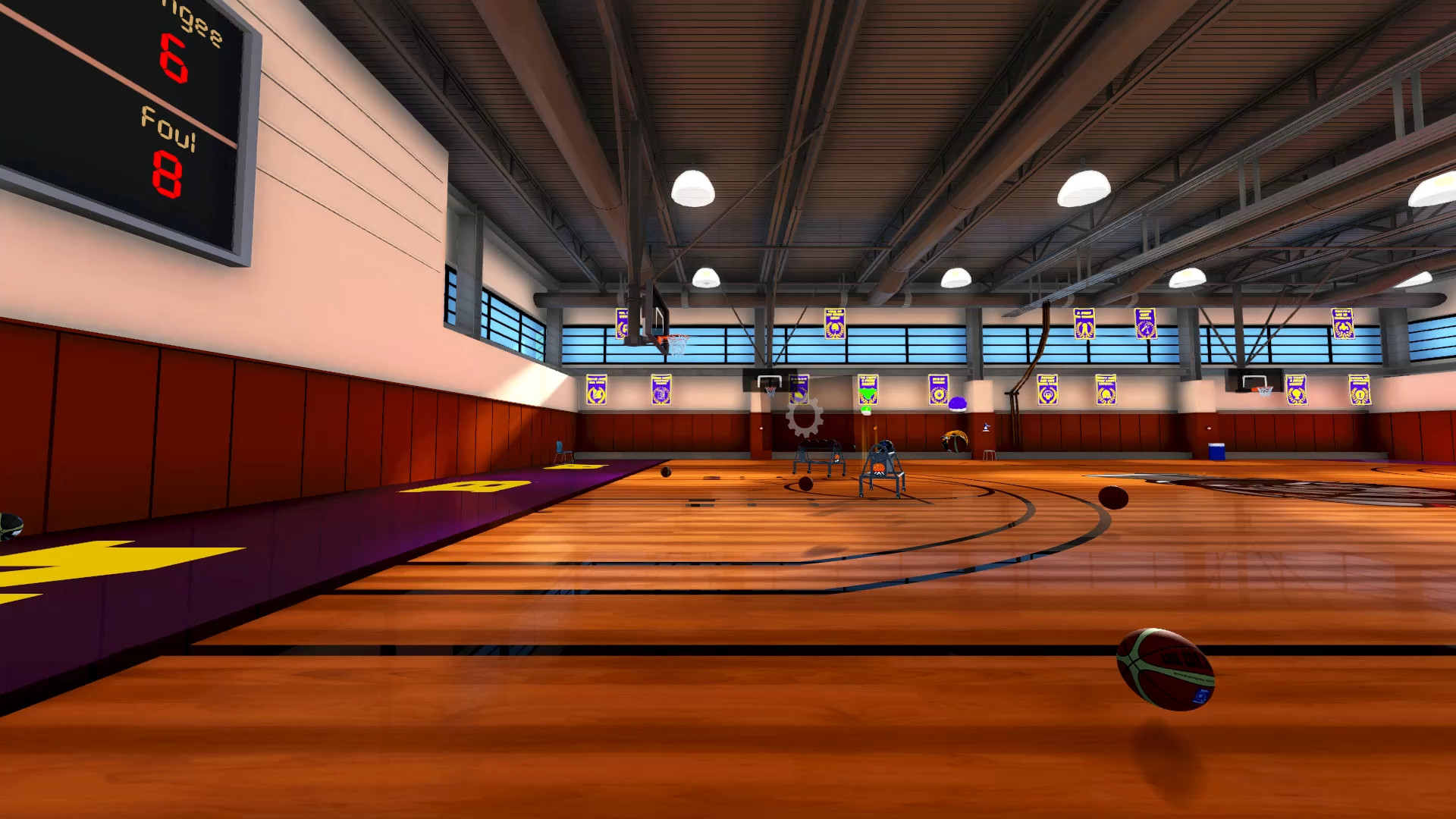 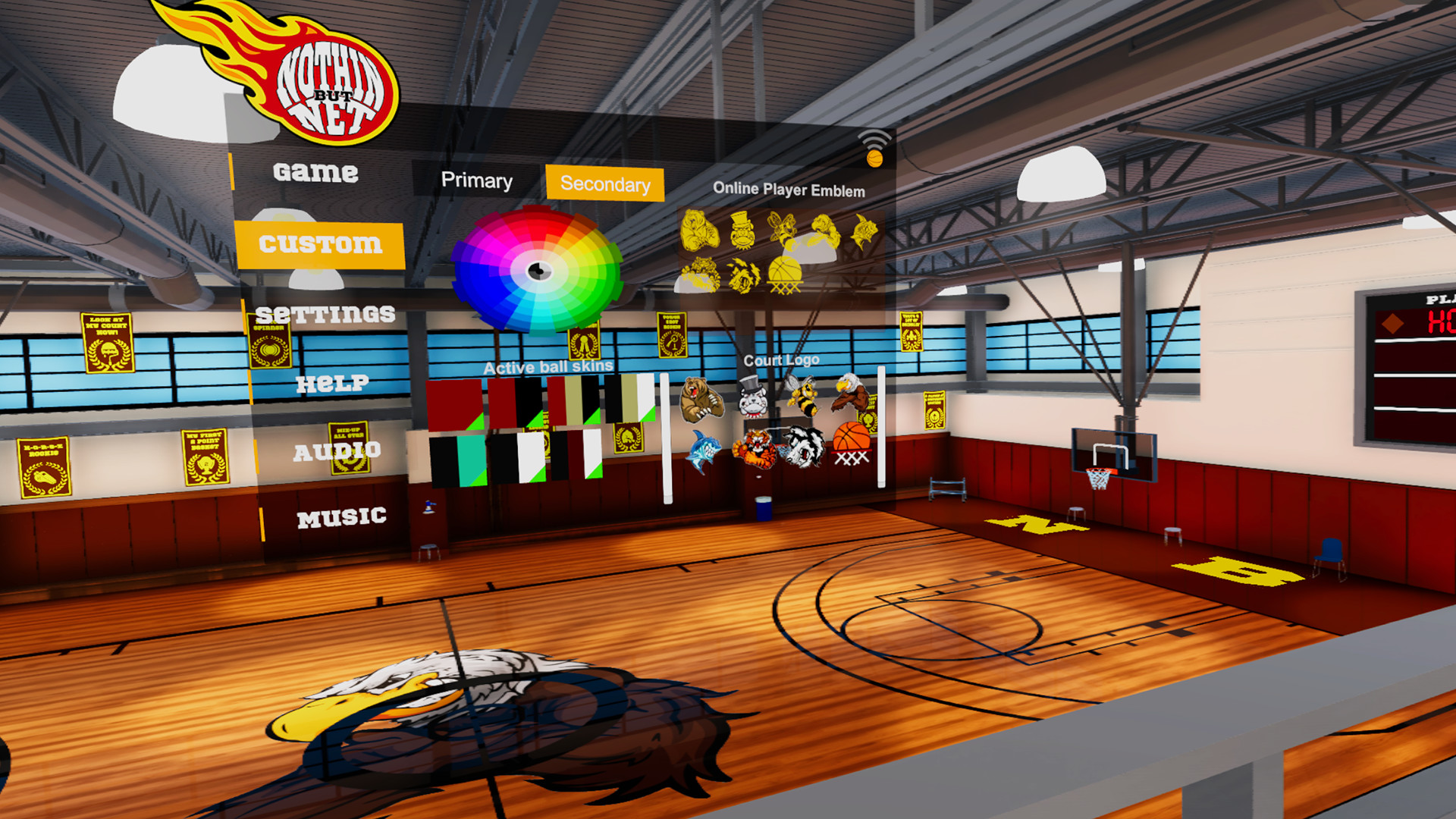 Nothinâ™ But Net brings you a realistic and fun basketball sports simulation to your VR play space. Play different variations of basketball on a life-sized gymnasium, challenging your friends in up to six different game modes including: Speed-Ball, Team Speed-Ball, H-O-R-S-E, Knockout, Rapid Fire and Free Throw. Or, practice solo in one of six game modes.

Experience moving around and playing with six different hoops in a realistic and accurately scaled gymnasium.

Adjust several settings to tailor game play to your realism preference and Virtual Reality setup, be it standing, sitting or a low ceiling.

Adjust the hoop height to regulation, or lower it to make shots from your chair easier.

Compete with friends and make new ones in six different online game modes.

Practice your skills and compete on the leaderboards in six offline game modes, several of which have varying levels of difficulty.

Show your unique personality by customizing your court and avatar.

Rock out and control your own music in game with the Steam Music Player integration.

Free Throw opens the gymnasium, letting you do what you want, when you want. Free Throw mode is without rules, letting you define your own or practice dribbling, shooting and balancing either online with friends or by yourself. Everything is enabled, making it the perfect place to explore the other features that Nothinâ™ But Net has to offer.

Free Throw can be played single player or online with 2-4 players.

In Speed-Ball, you go head to head with another player in real time, competing to be the first to score 20 points. If you are in possession of the ball, you can throw it down the court to move. Youâ™ll automatically teleport and rotate to face the ball so that you can catch it. Beware though! A savvy enough opponent can teleport in front of you to snag the ball. To keep the game moving at a fast pace, you can only hold the ball for up to two consecutive seconds. If youâ™re running out of power, consider dribbling the ball while you decide your next move.

Speed-Ball is only available in in online multiplayer with 2 players.

Note: This mode has been highly immersive in our play tests. A larger play space is recommended.

Team Speed-Ball is the first 2v2 real-time pick-up style basketball mode for virtual reality! In Team Speed-Ball, you and one other friend will pair up to compete against another team. First team to score 20 points wins! There’s no traveling down the court when holding the ball, so you’ll need to quickly and strategically plan your moves with your teammate.

Team Speed-Ball is only available in online multiplayer with 4 players.

Complete against your friends to see who can make a shot the quickest, or risk being eliminated!

Knockout is only available online with 2-4 players.

You will have one minute to make 25 shots from five positions around the three-point line into a regulation height hoop. The orange balls reward one point and the black/red balls reward two points.

Enjoy the classic game of H-O-R-S-E, but with a word of your choice!

Each round, you or a friend will need to invent a new shot. If made, everyone else will need to take the exact same shot. Anyone who misses the shot will gain a letter. Once they gain all letters for the word, they will be eliminated. The last player standing wins! Offline games are played against Kevin, who has varying difficulties.

H-O-R-S-E can be played single player against Kevin or online with 2-4 players.

Rapid Fire tests your ability to shoot without having much time to aim your shot.

Score as many points possible in the time given. Shoot fast or your ball will disappear! You can either challenge your friends in real time or play by yourself and see how you rank against the global leaderboards.

Rapid Fire can be played single player or online with 2-4 players.

Both Mix-Up and Power Shot will have you rapidly teleporting around the entire gymnasium while you try to make shots as quickly as possible. Power Shot adds a variation to the game by blocking your way with an obstacle, making it so you must shoot through a moving/rotating loop and into the basket.