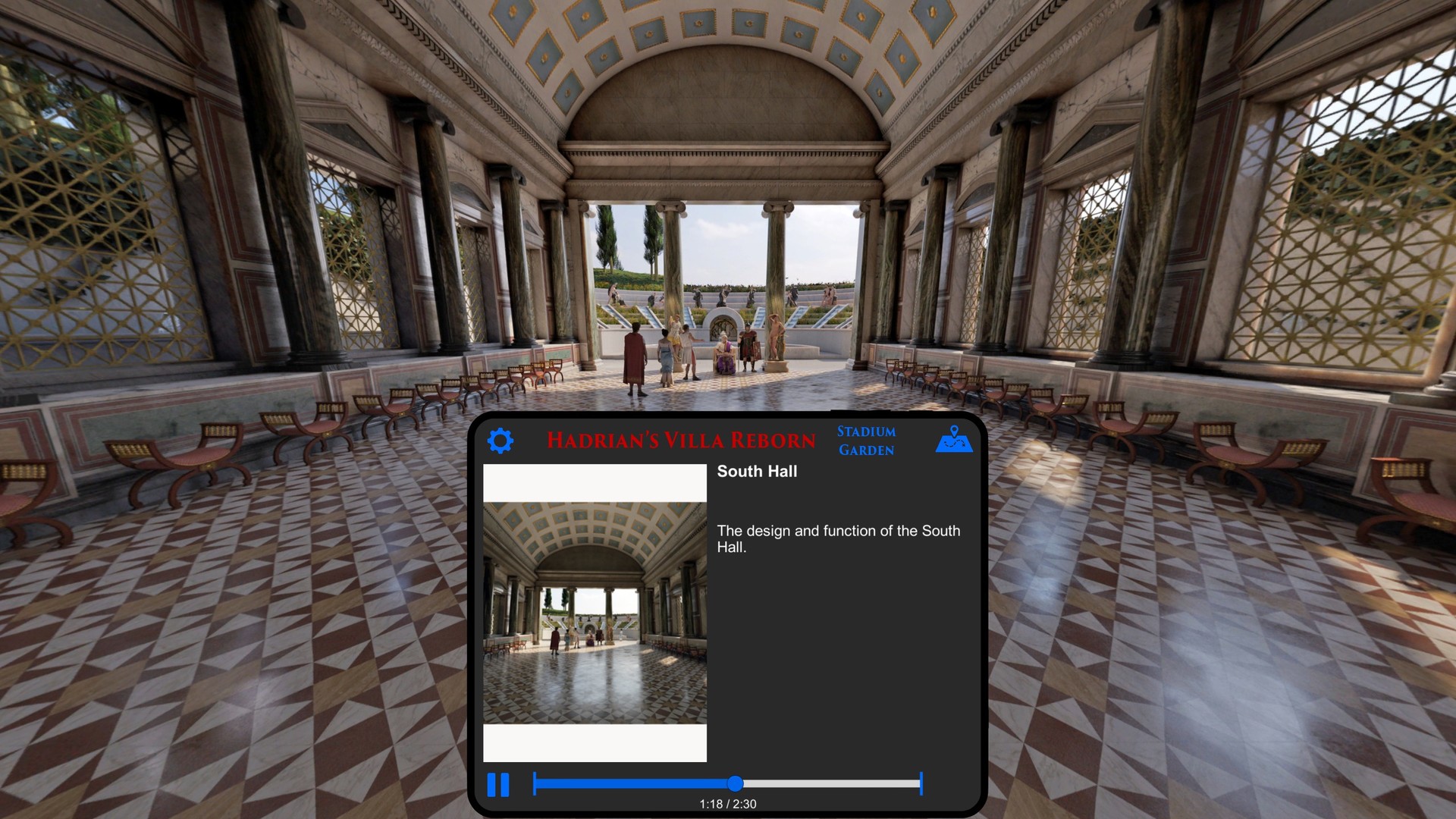 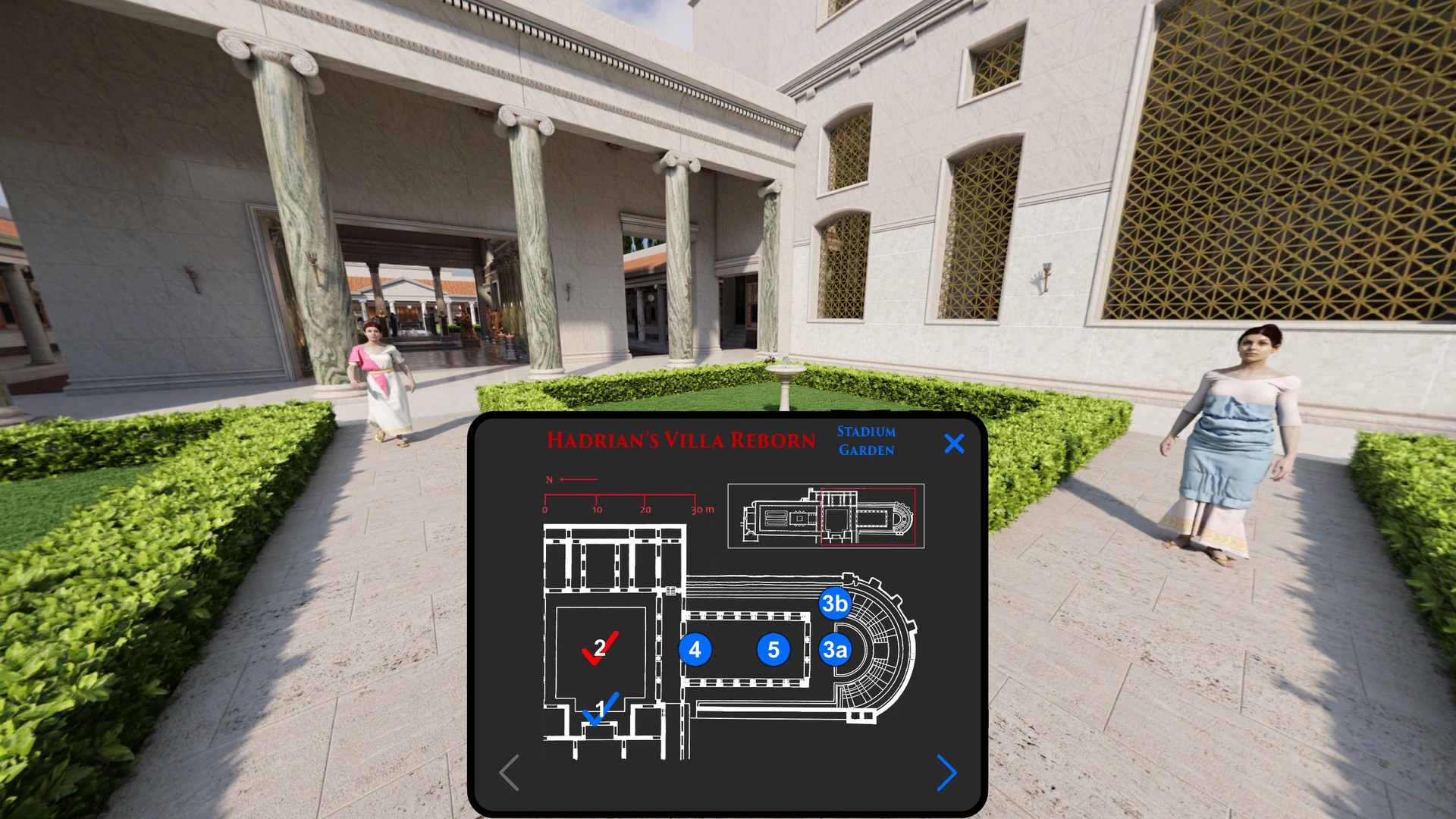 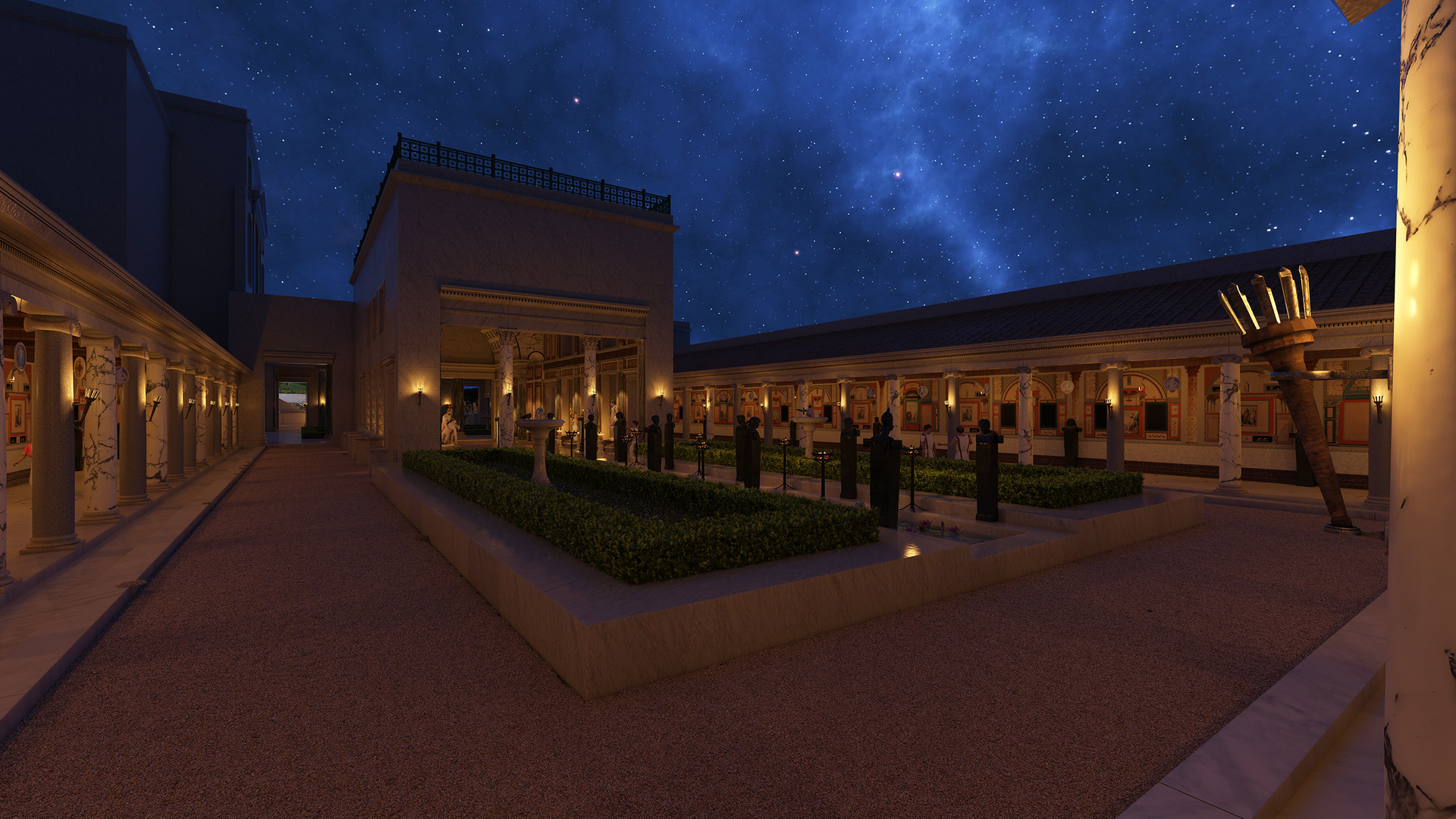 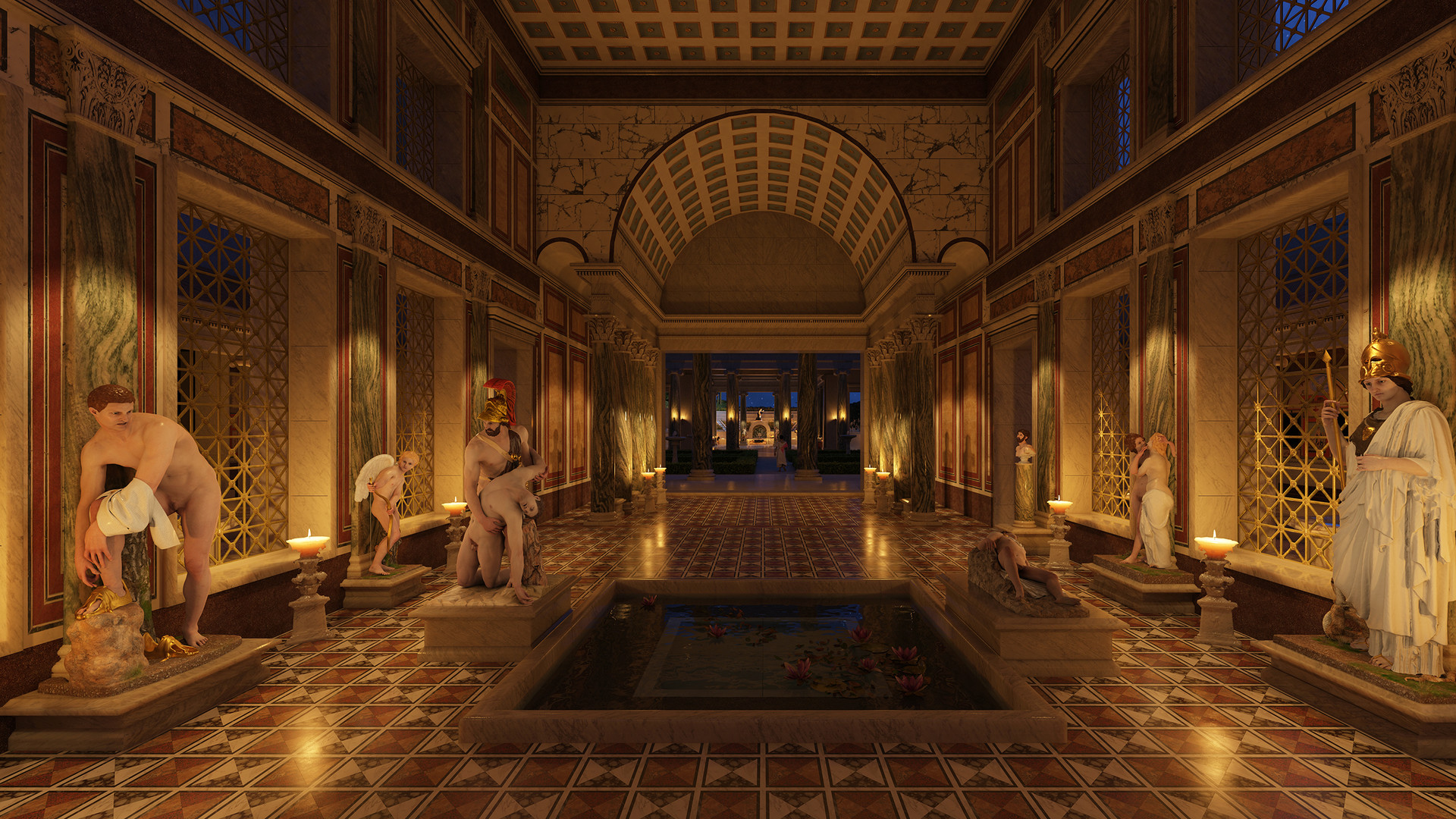 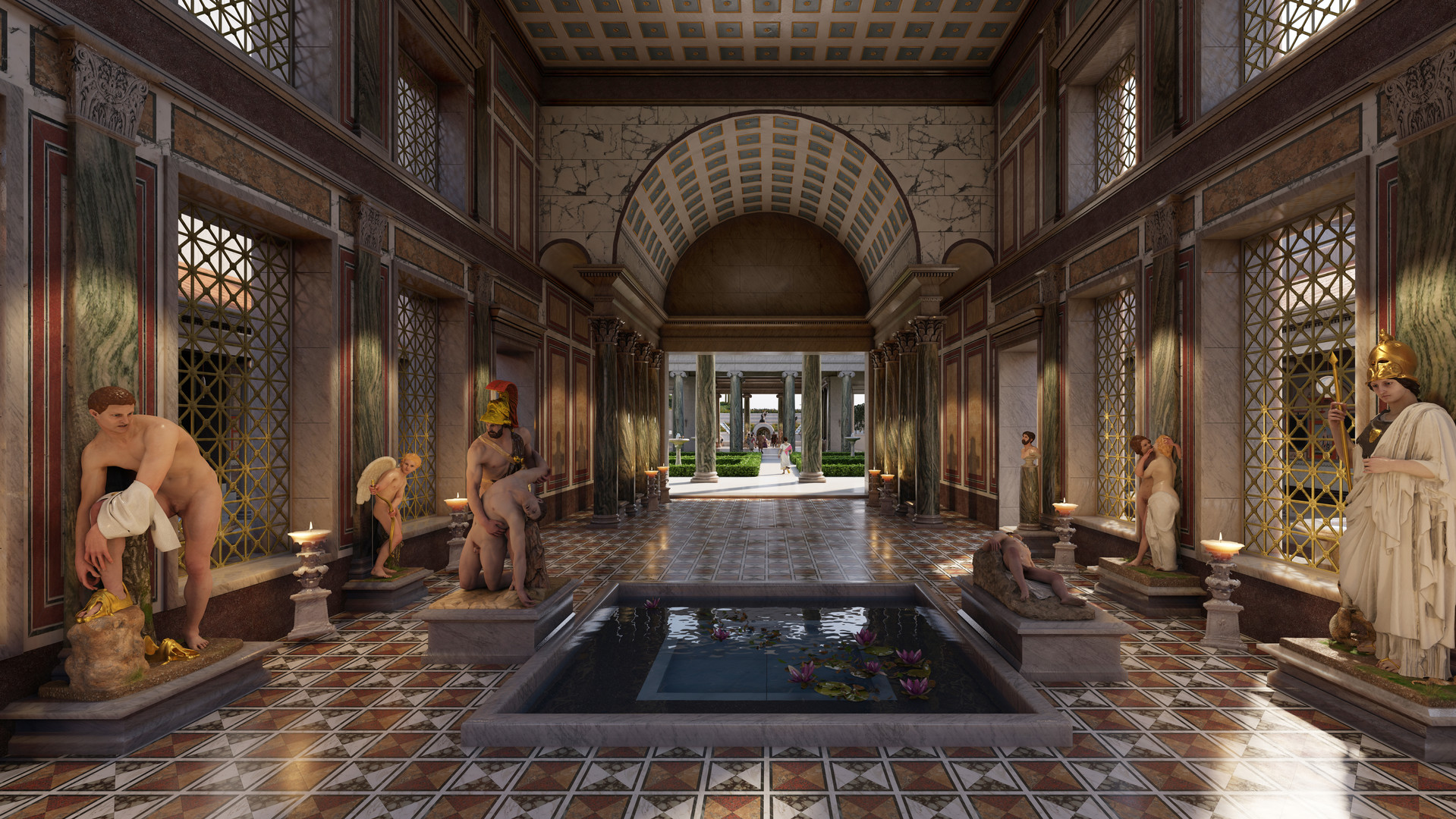 Take a virtual tour of the Stadium Garden at Hadrianâ™s Villa, the World Heritage Site located in Tivoli, Italy (30 km from Rome). Hadrian ruled as emperor from 117 to 138 of our era. This was the period when the Roman empire was at its peak in terms of culture, economic development, and military security. An enthusiastic builder and patron of the arts, Hadrian developed the villa throughout his reign. Known today as Hadrianâ™s Villa, the place was a government retreat where the emperor and his court could pursue the everyday tasks of administering the vast empire while also enjoying leisure activities such as bathing, banqueting, hunting, taking recreational walks (ambulationes), attending the theater, and even watching gladiators fight in a private arena. Lavishly decorated with sculpture, gardens, and fountains of all kinds, the villa was a delight to the eye of the ancient visitor. Today, the villa is in ruins. Some of its many major buildings are well preserved, while others have been reduced to their foundationsâoften invisible below the modern surface.

This virtual tour presents the Stadium Garden. âStadium Gardenâ is the modern name for a major complex at Hadrianâ™s Villa that, despite what we conventionally call it, was neither a stadium nor a garden. Instead, it consisted of structures used in warm weather to host imperial audiences, receptions, dinner parties, and ambulationes. The virtual tour takes you back in time to the 130s CE so that you can visit the site reconstructed as it appeared late in the reign of Hadrian. Along the way, you can also go up into the air to see the villa in the context of the enchanting landscape of the Tivoli area.

Your guide is Prof. Bernard Frischer, Director of the Digital Hadrianâ™s Villa Project. As you follow your curiosity and explore the highly accurate 3D reconstruction, you can play audio tracks in which Prof. Frischer explains what you are seeing and how the place was used in Hadrianâ™s day. Learn about imperial audiences, the imperial court, the Praetorian Guard, what went on at the emperorâ™s private banquets, and the Roman elite habit of the ambulatio. Understand how the Romans cleverly designed the rooms to be airy and cool during the heat of summer. Visit the emperorâ™s very own private dining room, and see the impressive North Hall, South Hall, the lovely North Garden with its surrounding peristyle. The dining room was used at night, so we even let you see how enchanting the complex becomes when lit by the artificial light of lamps, candelabra, and torches.

If art interests you, this is the right tour for you. On it, you will learn about herms, oscilla, wall painting in the age of Hadrian, and, especially, sculpture. You will see an impressive array of statues, ranging from the 16 statues illustrating the tragic story of Niobe in the South Nymphaeum to the only known sculpture gallery at the villa, which was housed in the North Hall. Here you can see such famous statues from Hadrianâ™s Villa as Endymion (now in Stockholm), Cupid and Psyche (now in San Antonio, Texas), the Pasquino Group (fragments of which are in the Vatican Museums), and the Sandal Binder (now in Copenhagen). All the statues have been painstakingly restored, even down to the color used to paint the white marble.

Anyone who takes Flyover Zoneâ™s virtual tour of the Stadium Garden comes away knowing far more about it than even a visitor to the actual archaeological site, now reduced to a grassy field. If you are planning to go to Tivoli to see the villa, you will get more out of your visit after taking Flyover Zoneâ™s virtual tour. And, since the virtual tour runs not only on PCs and VR headsets but also on smart phones (Android and iOS), you can easily take the virtual tour with you when you go to the archaeological park!
İlan Ekle! İlanlarım
İlan Ekle İlanlarım
Durum
Resim
Adı
Açıklama
Yorumlar
Teslim Saati
Stok
Miktar
Fiyat